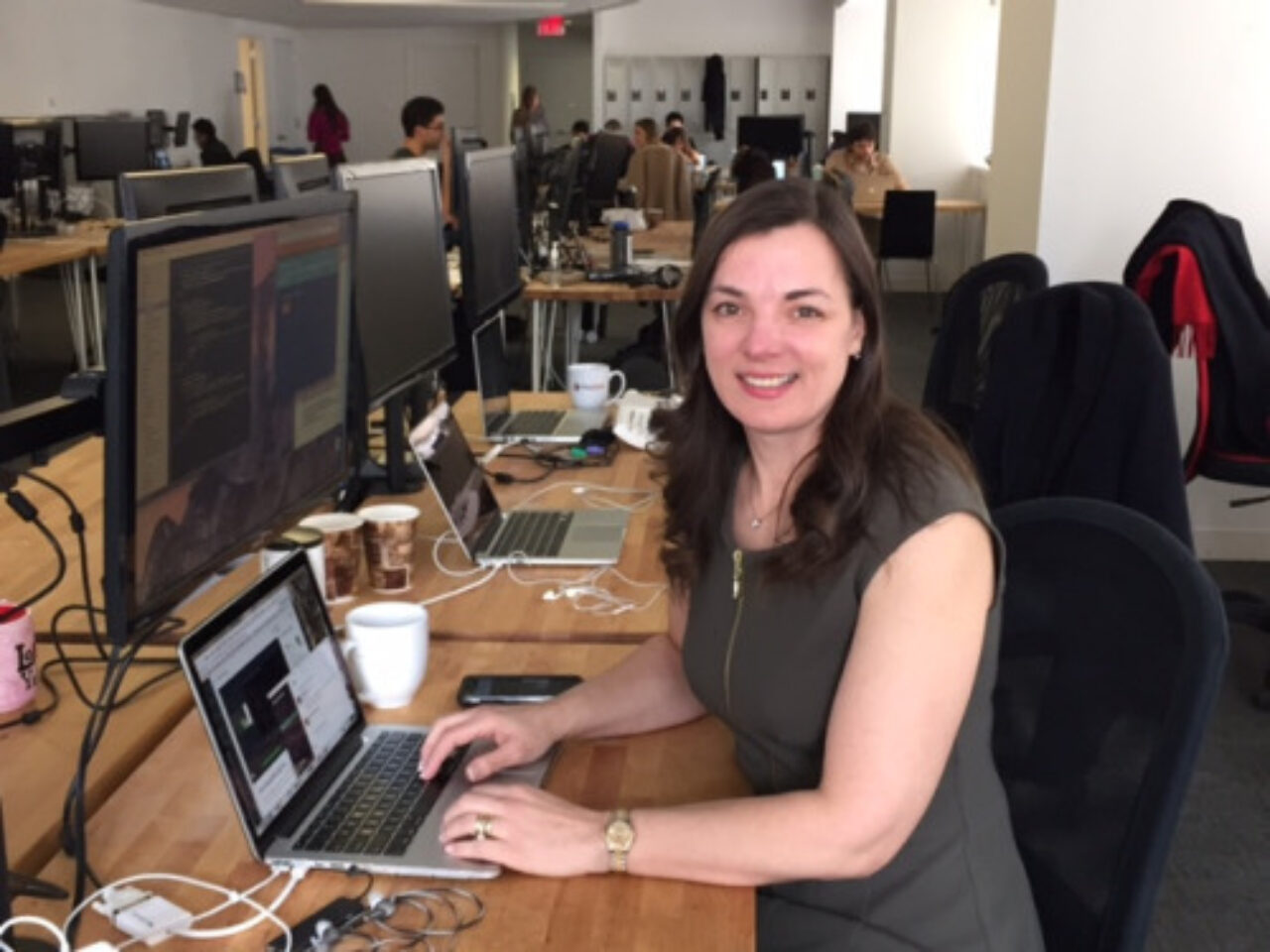 In this Feature Friday we interviewed Lynda Montgomery, a student finishing the full-time immersive at Fullstack Academy. Lynda, a mother of two teenage boys, two college girls, and math professor, has lead an accomplished life before coming to Fullstack. We sat down to ask her about her path to Fullstack Academy and her experience as a student.

What were you doing before Fullstack? Where were you working/ living?

I’m from Bellport, New York, on Long Island. Before coming to Fullstack I was an adjunct professor of Mathematics. I’m currently pursuing my PHD in Operations Research at Stony Brook University, that’s why I’m here actually.

What influenced you to start coding? Why did you join Fullstack?

I used to code a long time ago, and when I was going for my PHD I was doing a lot of algorithm work, but I didn’t do any direct coding. I had not done pure programming in a while and felt that I was facing a big knowledge gap. I was exploring education options and felt Fullstack would really fill that gap. One of my main goals is to implement some of the algorithms I’m doing with my PHD, and Fullstack’s in-depth and project based program has really gotten me there.

Is there anything you had to give up to come here?

It actually wasn’t too bad. Since I’m an adjunct professor, I pretty much just took a semester off. Other than that the only “sacrifice” is that the commute is two and a half to three hours each way from Long Island.

Because the commute from Long Island can sometimes be rough especially during the winter, what is the one thing that makes it all worth it when you walk through the Fullstack campus doors in the morning?

For me, its that the whole environment is so immersive, it’s fantastic. The amount of learning that you get and being immersed in it is really energizing. The train ride isn’t that bad because I do work on the way in and the way out. And once I get home, I don’t really look at it again once I’m there. The commute actually gives me a few hours each day to really review stuff or work on a project. So it kind of works out well that way.

As someone who has a family, what is it like juggling bootcamp life with home life?

It’s a good thing that I have a supportive husband. Right now he mostly works from home, so he is able to be there for my two boys who are both in high school. They still need someone to be home. I leave at around 6:30 in the morning and I don’t get home until around 9:30 at night. It’s definitely a long day!

Are you able to use the weekends to your advantage?

Well my sons are teenagers so they usually sleep in until ten. I use the mornings to get work done and then spend the day with the kids.

What is your favorite thing about Fullstack?

Academically I think that the pair-programming, in both the workshops and projects, is a great learning tool. Switching programming partners lets you learn from different people. I really like that a lot, it’s something you can’t do if you’re working on your own. Also, there are places on campus you can go to when you want to talk, and there are other spots you can go to when you don’t want to talk to anyone, it’s a very comfortable environment.

What’s the biggest challenge you feel like you faced at Fullstack?

I guess my biggest challenge was probably myself! It was a challenge just realizing that I could actually do the work. You know self doubt… In the beginning I’d find myself thinking “I don’t know what I’m doing”. But then I recognized that I actually do know a lot more than I realize, I just need to have confidence and go for it. Moving from the first half of the program where I was a little afraid to try solving more complex programming problems, to where I am now was a big move. It’s given me the confidence to rely on myself to be able to figure out different problems and fix them.

As a final question, where do you see yourself after graduating Fullstack?

I definitely want to work as a software engineer, in some sort of role that can combine my background in algorithms and mathematics with coding. Hopefully I can talk to you in a few months and tell you “I’ve found my dream job!”

**Follow-Up:** Less than 1 month after graduating Fullstack, Lynda secured a job as a software engineer at FireEye, a large cyber security company!