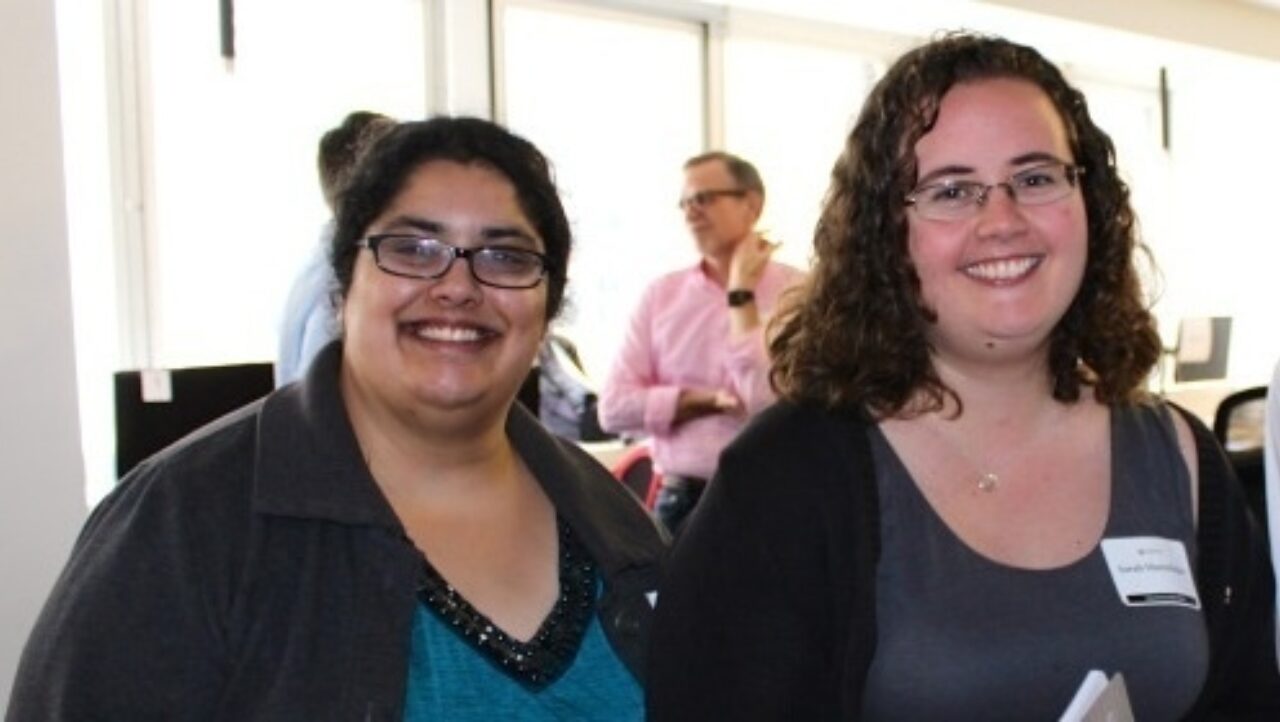 In this month’s Fullstack Feature we talk to Seema (on left) and Sarah– two students of Fullstack who have completed the 13 week immersive program as well as a three month fellowship after graduation.

Explain your individual journeys to Fullstack. What got you interested in coding? Why did you choose Fullstack?

Sarah Muenzinger: Before Fullstack I worked as a social worker. I liked the work and I liked helping people, but I spent a lot of my day just kind of struggling with technology and often my clients lives depended on fax machines working and software that was from the 90s… It was very frustrating. I decided that I was going to learn some front-end development so I could make basic websites for a lot of the nonprofits I was working with. I noticed a lot of them didn’t have websites at all, so I started teaching myself coding and building sites. I wanted to go to Fullstack so that I could learn at a much quicker pace than I was at home.

Seema Ullal: So I studied applied math in college and I took some programming classes. I liked them but I didn’t realize how much I liked them at the time. After I graduated I did Teach For America. That was a good experience, but I realized that I really missed the critical thinking, problem solving, and technical challenges that came with more computational disciplines. I thought about what kind of classes I had taken and realized I liked the programming classes more than I liked any of my math classes. I think a lot of that has to do with how I like solving problems and thinking about how to apply technology to challenging things. So I decided to go to grad school and study computer science. Although I learned a lot there, I felt like I wasn’t building anything important. When I heard about Fullstack it sounded like exactly what I was looking for because you learn super relevant technologies while getting the chance to work on your own projects.

How would you describe your Fullstack experience, in just three words?

Let’s talk about a project you both built, Bechdelerator. This was for a hackathon you two worked on together during your senior phase. Can you explain the project, describe for us what your original intentions were for it, and how it has evolved since then?

SU: So the project is centered around this test called the Bechdel test. It was created by an author named Alison Bechdel and it basically assesses the presence of women in a movie. A movie passes the test if there is at least two women in the movie having a conversation about something or anything that does not involve a male character. You’d think that most movies would pass that test, but a surprising number don’t.

We decided to do this project because we thought it was an interesting challenge to try to take a piece of text, the move script, and have a computer analyze it. There wasn’t really any database or anything of whether movies had passed the test, there were just collections of people debating whether movies had passed the test. We were interested to see if we could do that using an algorithm.

SM: This was a hackathon project so we only had three days plus a weekend to put it together. We definitely prioritized what we thought were the “Wow” moments, which meant that for our original version we were essentially inputting movie scripts into the Bechdelator and then analyzing them. Now that we’ve had more time to polish the project, we made a web scraper that will find a movie’s script for you, which I think makes it a lot more user friendly. So you can go to our app, pick your favorite movie and then see how it fares for the Bechdel test.

You two are, in loose terms, advocates for women in tech… presenting Bechdelerator at different Meetups (including a recent Women Who Code Hacknight) and active participants of “Ladies of Fullstack” lunches on campus. Why do you think it’s important for women to be involved in tech?

SU: I think that it’s important, though I wouldn’t say that somebody should be involved in technology just because they are a woman. I think that obviously there is a huge gap in diversity and technology, not just for women but for various groups of people. I guess my answer is that it’s important to improve the gender ratio in tech, but there are challenges that women face because they are minorities in this industry. I think that those challenges need to be addressed. When I went to grad school for CS, for example, there were plenty of women in my courses, often 50% of a class. When you go into the industry, you see that the retention rate is extremely low. I don’t think the problem is always getting women to necessarily pursue technology, I think it’s also targeting them to stay in the field and to not leave.

SM: I think it’s really important, that we need more women in tech and not just women, other groups too. We need a diverse array of voices in tech in general, because in a lot of ways the tech community dictates norms in society. I think the websites and products that we build today drastically influence how society works, because that’s what everyone is using. In the same way that voting is one of the primary ways to have our voices heard, I think that being present and having a strong voice in the tech community is really important for society. What would you say to a woman who wants to get into programming but feels intimidated by how male dominated the field is?

SM: Do it! I took a computer science class in college and I thought it was neat, but I assumed that it would take me decades before I could make anything useful or interesting. I was intimidated by the awesome people in my class who were creating great things and I saw how they had been studying how to make cool things on their graphing calculators when they were 10, and what had I done? So I assumed that it would take me forever to do anything interesting. That’s just not true. You can do really great things in three months, to six months to a year and it’s just keeps ramping up from there. Just because it takes you a little longer or just because you haven’t heard of something before doesn’t mean you can’t learn it today.

SU: One of the things that I didn’t expect was that as a woman in technology you are part of this really incredible community of women… I have met some really powerful, amazing and inspirational people that have encouraged me and I think that if you want to be a part of it, you will have great support. For example, Sarah and I recently presented Bechdelerator at a Women Who Code event… It was a really encouraging space. We regularly see people at their events who are just starting off in programming and their careers, and there is no judgement at all. The atmosphere communicates “we were in your shoes once too, let us help you”. I think that everyone in the industry, not just women, have realized that diversity is pretty low, and they’re trying to help. It is a good time to get involved in the field.

What are your plans and hopes for after Fullstack?

SM: I’m hoping to find an organization that I can continue to learn at, I am definitely hoping to find a place where I believe in the work that they are doing, and that has a positive impact.

SU: Yeah I would definitely like to find a place where they are building a product that they believe in. And also a place that is excited about technology, and love what they do. I am extremely happy to be in the field and I love it. I would like to be surrounded by people who are similarly passionate, excited and inspired. I think having a culture of learning is also super important and I would love to have opportunities to continue learning and be encouraged to do so.

Sarah and Seema are recent grads of Fullstack Academy and the Fullstack Fellowship Program. After Fullstack, Sarah got a great job as a JavaScript Developer at a cool NYC startup Yuzu, and Seema landed her dream job, working at ZenPayroll as a software engineer!