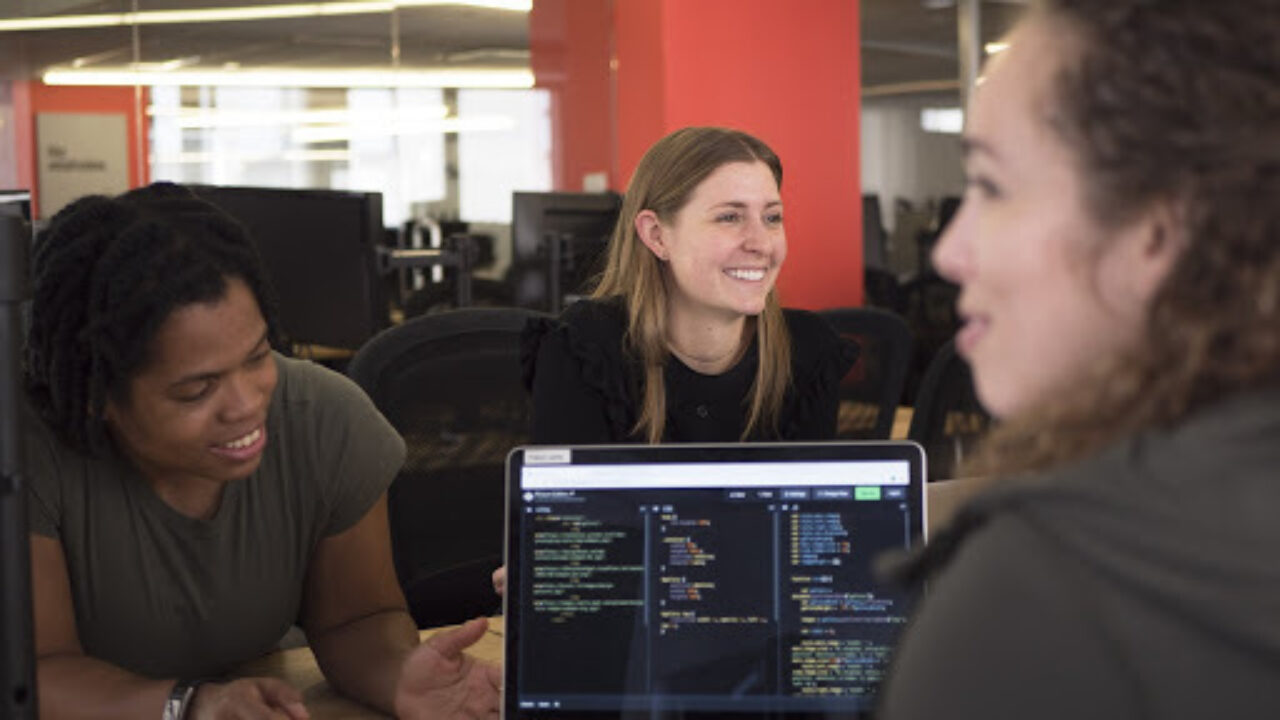 As part of this initiative, we cover half the tuition for all the Edie Windsor coding scholars who are admitted to our programs. This year, that could mean a commitment of up to $90,000 to the LGBTQ+ community—and we’re thrilled to play a small part in supporting these folks to become developers.

Eligible individuals submit an application and indicate their first and second choice bootcamps. Then, Lesbians Who Tech chooses winners and works with their indicated top-choice bootcamps to allocate half-tuition scholarships for all of them.

In today’s world, where blue-collar jobs have been usurped by robots or outsourced to developing countries, skills training for white-collar jobs is more important than ever. You need in-demand skills to make money. But guess what? You also need money to get in-demand skills. It’s the snake eating its tail: You can’t get an education without the money to pay for it, and you can’t make the money to pay for it without having an education.

That’s where organizations like Lesbians Who Tech come in. Coding bootcamps, while not cheap, are far less expensive than a four-year CS degree, and endow you with specific in-demand skills in a fraction of the time. LWT then takes that model a step further by getting commitments from coding bootcamps like the Grace Hopper Program and Fullstack Academy to cover half the tuition for Edie Windsor scholars. That makes a coding bootcamp education even more accessible, opening skills training to people who might not otherwise have had access.

And our partnership with LWT isn’t the only way we make technical skills training more accessible.

The Grace Hopper Program itself offers deferred tuition specifically for this reason. Under this model, students pay only a deposit to enroll and don’t owe full tuition until after they’ve graduated and started earning a paycheck from a full-time job, which is when they actually have the means to pay. This empowers women who don’t have either $20,000 in the bank or the credit score it takes to get that much in loans--or who would not have taken the risk on their own to get the same education as someone who does.

Then there are programs like our Web Development Fellowship, or WDF, which empowers low-income folks in NYC with full scholarships. These initiatives break the chicken-and-egg cycle we discussed earlier, in which you need money to get an education, but you need an education to get money.

The goal with WDF is to stimulate the city’s economy, buoy specific communities, and change the lives of the individuals who come through our program. And it’s working. More than 60% of WDF graduates now have good-paying jobs (one, for example, went from making an hourly wage as a mover to making upwards of $85,000 annually at BlackRock), while more recent grads are now working with career counselors to land their first positions.

We can’t underestimate how powerful it is to see women—and specifically LGBTQ+ women and non-binary folks—working in the tech space, which has for most of its existence (intentionally) been the domain of straight white men. According to LWT, women currently account for only 1 in 15 people in the STEM industry (yikes), which means, for example, that women are rarely quoted as experts in articles or studies and that most panels* include few, if any, women. This only reinforces the notion, especially subconsciously, that women are not experts or authorities.

*If you aren’t following @allmalepanels, you’re MISSING. OUT.

Young LGBTQ+ women and non-binary individuals must have role models in the industry, both to offer those young people more paths to success and to normalize their existence there so that when they do enter the industry, the environment is more welcoming to them than to any generation that has come before.

LWT asks, “Outside of Ellen, Rosie, Melissa, and now Tammy, what other mainstream lesbian role models can most people name?” That’s why this scholarship honors Edie Windsor, the longtime LGBTQ+ activist. Windsor is most recognized for her role as the plaintiff in the Supreme Court case that struck down the unconstitutional Defense of Marriage Act (DOMA), which defined marriage in the law as a union between a man and a woman.

But Windsor was also a manager and tech pioneer at IBM—and this scholarship aims to mold the next generation of Edie Windsors: Humans not defined solely by their sexualities, but respected enough to be seen for their whole selves, including as LGBTQ+ individuals.

Many of our programs—like Grace Hopper and WDF—strive specifically to serve underrepresented* individuals in tech because we recognize both the possibilities it opens up for others and the ways in which we as humans and as businesses benefit from diverse teams and perspectives.

*The community People of Color In Tech makes a case that, in fact, white people are overrepresented, rather than individuals of color being underrepresented. We give this all the claps and want to find better language. @ us @gracehopperfsa with your suggestions.

Our Largest Group of Winners Ever

This year, the LWT Edie Windsor Coding Scholarship had 1,000 total applicants across 25 bootcamp partners, including us. Nice work, LWT!

We’ve taught several past scholarship winners at Grace Hopper—including one who’s now a software engineer at a luxury travel start-up—and we’re excited to announce that this year we’ve got our largest group of scholarship recipients to date, with nine Edie Windsor coding scholars applying to Grace Hopper.

Without further ado, here are the nine Edie Windsor scholars who chose the Grace Hopper Program or Fullstack as their top coding bootcamps. Huge congratulations to all the finalists and scholars, and we hope to see all the women and non-binary folks who picked us as their top choice sitting in class very soon.

Andrea is a Detroit native who now resides in Chicago and will soon join the next cohort at our Chicago campus. She’s been working since college as a special education assistant but found herself longing for work that’s a bit more complex and challenging. Being the daughter of both a Ford engineer and a GM designer means problem-solving and engineering are in her blood, and she can’t wait to apply that mindset to technology.

Pelin is a quality assurance and sales engineer who has overseen various industrial processes and products. Her recent foray into marketing digital products piqued her curiosity and led her to discover she wants to participate in building products. She has a degree in Chemical and Biological Engineering from Koc University and hails from Turkey, and she hopes to use her experience at Grace Hopper NYC to mentor and empower women in software engineering.

Alexa is currently a career counselor with experience as a tutor and test prep instructor, freelance blogger, and youth program assistant. She fully embraces the value of interdependence and building strong communities as a solution to social problems. Alexa started writing code last year as a way to build her skill set and is now looking forward to making web development her full-time gig. In her spare time, she loves reading, cooking, and going to local community events. We’re wishing her the best of luck as she navigates the admissions interview for Fullstack NYC.

Carmen is an Afro-Latina lesbian originally from Florida and currently based in New York. She works on Wall Street as an AVP for an asset management firm and also manages her own online financial management platform, Make Real Cents. Her journey toward becoming debt free involved using both old and new school tools and technologies, and she saw firsthand the increasing demand for user-friendly tech that can help with personal debt and financial management. Carmen hopes that becoming an expert in software engineering will help her take her passion for personal finance even further. We were excited to see Carmen’s application for Grace Hopper NYC and looking forward to learning more about her.

Andrea “Andy” Barr has a background in fine arts and biology, as well as a passion for creating visuals that educate and bring people together, particularly as it relates to physical and mental health. She wants to build platforms that will allow people to research illnesses and treatments and open up communication channels between medical professionals, peers, and the public. She dreams of a digital environment that facilitates an individual making informed decisions about their health and helps everyone, but especially social minorities, heal and thrive. We can’t wait to interview Andy for the Grace Hopper NYC cohort.

Windy Sengsatheuane is an aspiring data wizard from Houston, Texas who now splits her time between Brooklyn and Philadelphia. She worked in public housing for a decade and for the City of NYC as a Director of Strategic Performance and Innovation for the last 2.5 years. Sengsatheuane completed the Data Science Program at General Assembly in 2017 and is excited to apply to the Grace Hopper NYC campus. In her free time, she enjoys practicing hot yoga, reading on the M train, making wicked cocktails, and hanging out with her girlfriend’s cat Finnegan.

Laura is a genderqueer boricua born in San Juan, Puerto Rico. They have a Bachelor's Degree in Comparative Literature from the University of Puerto Rico in Rio Piedras and a Master of Library and Information Studies from University College Dublin. They enjoy film festivals, Nintendo videogames, and borrowing books from their local library. We’re eagerly awaiting Laura’s application for Grace Hopper NYC.

A native New Yorker, Yasmine has been a successful fundraiser for many years and has a BS in Economics and an MS in Education. She is excited to dive into learning how to create outstanding user experiences in the tech world and considers herself a strong relationship builder and creative problem solver who is passionate and black and brown equality. In her spare time, Yasmine loves to read, engage in stimulating conversations, spend time with family and friends, listen to soul-moving music, and study astrology.

And rounding out our group is Erika Serrano. We can’t wait to see their application come through!

Want to join these scholars on a coding journey of your own? Prepare to ace our admissions assessment with these five free coding resources.