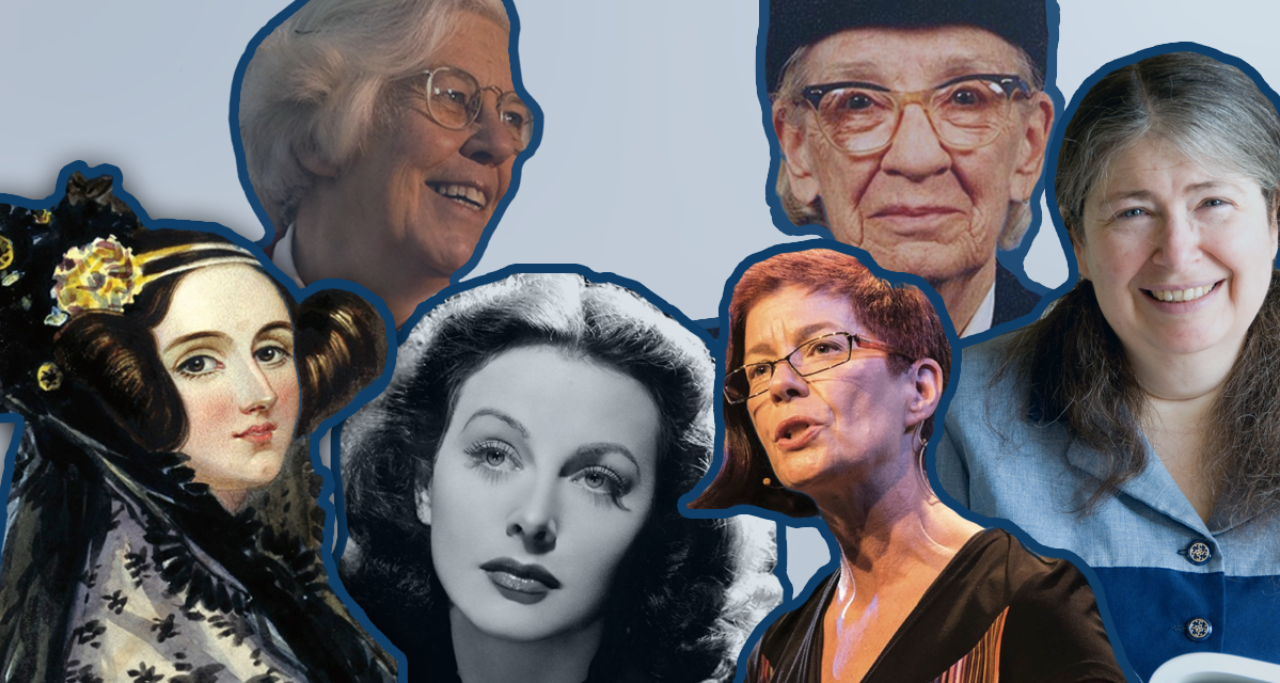 Women programmers have been responsible for some of the most important designs, inventions, and innovations in tech—in fact, the world’s first known programmer was a woman (more on her soon). Though many of these women have yet to receive the recognition they deserve, we’ve been pleased to see some recent shifts in the conversation, including this recent NYT feature outlining the long and storied history of women who built and shaped the art of coding.

Raising awareness around individual women programmers and their specific accomplishments helps remedy the misconception that programming has always been a man’s world. On the contrary: It wasn’t always this way. Women have been paving the way since day one, so here are 16 influential female tech pioneers you need to know about.

Mitchell Baker is a co-founder of the Mozilla Project and acting chairwoman of the Mozilla Foundation. Her open-source journey started in 1998, when she created Netscape’s open-source license in her capacity as a lawyer. That experience inspired her to co-found the Mozilla Project, which she later led as the company’s “Chief Lizard Wrangler.” Mozilla, now known as the company behind the web browser Firefox, continues to offer best-in-class private browsing, as well as petitions users to fight for net neutrality.

Baker has been widely acknowledged for her work both with Mozilla and open-source software in general. In 2005, Time magazine named her one of its 100 Most Influential People, and she’s also been inducted into the Internet Society’s Internet Hall of Fame.

Anita Borg was a computer scientist and a staunch advocate for the advancement of women programmers. Borg, who herself discovered programming in her 20s and graduated from New York University with a PhD in computer science, has probably done more than anyone else to advance the cause of women in tech.

Next up: Elizabeth “Jake” Feinler, who birthed the internet URL system we take for granted today. In 2012, Wired’s Cade Metz wrote an excellent profile on Feinler, who, for nearly two decades, ran the Network Information Center (InterNIC), the organization originally responsible for overseeing the use of internet addresses and for publishing internet directories. That’s right—before the existence of private domain registrars and Google, one organization did it all. As part of her work at Menlo Park, where InterNIC was based, Feinler—together with colleagues—famously created the top-level domain naming scheme (.com, .edu, .org) that is now ubiquitous.

Though she is now officially retired, that hasn’t stopped Feinler from contributing to internet advancements in the form of historical preservation. She is an active volunteer for the Computer History Museum and has co-compiled a timeline of the development of email. She has also donated money, organized information, and written detailed inventories for the NIC project archives.

A model student, Katherine Johnson skipped enough grades to begin high school at age 13, continuing her education until she earned a Ph.D. in mathematics. After the Soviet Union launched Sputnik, the first manmade object put into orbit, Johnson began working with NACA, later renamed NASA, to develop the foundational computations that made a United States space mission possible.

When John Glenn prepared to be the first American to orbit earth, he asked for Johnson by name to run manual tests of the computations made by computers to control the spacecraft's flight trajectory. Johnson's contributed to further space flights and reports until retiring in 1986. President Barack Obama awarded Johnson the Presidential Medal of Freedom in 2015.

Hedy Lamarr is best known as a Hollywood superstar, so you might be wondering why she’s on our list of women programmers, but off-screen, Lamarr was known for her dedication to her other passions: science and inventing. In fact, she created the communication system that would later become the basis for WiFi, GPS, and Bluetooth.

That invention, originally a radio guidance system, helped the Allies win the Second World War. That was the whole point: to use different frequencies to guide underwater missiles and render them undetectable. Sadly, despite having patented the technology—which was subsequently used by the military—Lamarr and her family have never seen a cent in return for its use during the war or in subsequent modern technologies, and you probably had no idea how this Hollywood star changed the face of technology.

Grace Hopper is one of the most notable, accomplished, and acclaimed computer scientists ever to have lived. Prior to her death in 1992, Hopper enjoyed a dual career in computer science and naval service that spanned more than four decades and saw her retire as the Navy’s oldest commissioned officer.

As a Navy WAVES lieutenant, Hopper was part of the Harvard team that built the first-ever computer, the Mark 1. After the Second World War, Hopper was involved in the creation of UNIVAC, the world’s first commercial computer. She also developed the first universal programming language for business, COBOL, which is still in use today. Hopper is even credited with coining the term “debugging.”

As Science Focus points out, her nickname “Amazing Grace” was not given without merit, and she continues to inspire women programmers today. As we mentioned, it’s for Grace Hopper that Anita Borg’s annual event for women technologists is named, and Fullstack Academy’s all-women coding bootcamp is also named for her.

Steve Jobs and Steve Wozniak may have created Apple, but it was Susan Kare’s design skills that defined Apple’s user experience for generations and gave the Macintosh its signature smile.

Kare was a sculptor before getting hired by Apple and pivoting into graphic design. AIGA notes that as a designer, Kare “created some of the most recognizable icons, typefaces, and graphic elements in personal computing: the command symbol (⌘), the system-failure bomb, the paintbrush, and, of course, ‘Clarus the Dogcow.’”

Since leaving Apple, Kare has started her own graphic design company, Susan Kare Design, and created logos and icons for other giants of the tech world, including Microsoft and Facebook.

Dr. Radia Perlman is a network engineer and software designer known to some as “the mother of the Internet.” Given such a moniker, it will come as no surprise that Dr. Perlman has made significant contributions to the development of the internet and computer science in general. While working toward her master's degree at MIT, Dr. Perlman worked on LOGO, the first programming language created specifically for children. She then went on to create a simplified version, TORTIS (Toddlers Own Recursive Turtle Interpreter System), that could be used by preschoolers.

But Dr. Perlman is best known for her spanning tree algorithm, or STP for short. STP solved the initial problem of data sharing between computers and stopped data from becoming trapped in a loop. Hackaday’s Richard Baguley explains that Perlman’s solution was so simple that it now seems obvious—and yet because it was so simple, “Dr. Perlman struggled to get her fellow engineers to accept it.”

Even though Dr. Perlman’s original STP has since been updated and replaced, the fundamental idea behind it still underpins much of the internet and the related science of networking.

Ada Lovelace was a Victorian-era mathematician widely considered to be the first computer programmer. As the daughter of famed British poet Lord Byron, her position in society allowed her to access subjects traditionally forbidden to women of the time. Lovelace was mentored by Charles Babbage, a mathematician and mechanical engineer who created the concept of a programmable digital computer.

It was a program she wrote for Babbage’s computer—a program to find Bernoulli numbers, a sequence of numbers that occur frequently in number theory—that has earned Lovelace her recognition. As Two-Bit History explains, “Her program was specified with a degree of rigor that far surpassed anything that came before.” But Lovelace had an influence that went beyond her technical aptitude, says The New York Times reporter Claire Cain Miller. She was able to see the full potential of computing and understood that it could also be used to create music or art.

Lovelace’s impact on the world of technology lives on and is observed on the second Tuesday in October with Ada Lovelace Day, on which individuals and organizations alike celebrate the achievements of women in STEM.

Karen Spärck Jones was a computer programmer who laid the foundation for modern search engines.

Spärck Jones pioneered advances in information retrieval that empowered users to work with computers using ordinary language, rather than having to learn code. “When most scientists were trying to make people use code to talk to computers, Karen Spärck Jones taught computers to understand human language instead,” writes The New York Times’s Nellie Bowles.

But Spärck Jones is most celebrated for her 1972 paper in the Journal of Documentation, in which she introduced the concept of inverse document frequency, a method for counting the number of times a phrase appears in a document to determine the phrase’s importance. This was crucial to the subsequent development of modern search engines, which all still rely on Spärck Jones’s work today.

The Women of ENIAC

The final entry on this list belongs to The ENIAC Programmers, six young women who worked on the world’s first all-electronic programmable computer. Kathleen McNulty Mauchly Antonelli, Jean Jennings Bartik, Frances Snyder Holberton, Marlyn Wescoff Meltzer, Frances Bilas Spence, and Ruth Lichterman Teitelbaum were the six chosen by the U.S. Army to program and run the ENIAC (which stands for Electronic Numerical Integrator and Computer) during the Second World War.

As Claire Marchand of the International Electrotechnical Commission (IEC) explains, the women “learned to program without programming languages or tools, because none existed. They used only logical diagrams, and the work they did calculating ballistic trajectories was extremely complex. When the project was completed, ENIAC could run missile trajectories in seconds.”

Despite their pioneering work, these six women were never credited when the ENIAC was unveiled to the public in 1946. For years, they remained invisible, which is why the ENIAC Programmers Project was born to research their work, share it with the public, and honor the women who were the programmers behind ENIAC for almost two decades.

Want to follow in the footsteps of these female pioneers and make your own mark as a woman programmer? Check out Fullstack Academy’s Grace Hopper Program, an immersive coding bootcamp for women with no upfront tuition costs.