What we've learned so far in our VR Lab

Mark Davis runs product for Fullstack Academy. In this post, he describes what it was like to open our VR Lab in 2016, and reflects on some of the things we've learned so far.

As this point, we've seen all kinds of cool VR experiences in the lab, and some of them have been pretty amazing. But the area that's capturing our imagination the most is social VR. We think schools like Fullstack Academy can use emerging social VR tools to create a better overall experience for their online students. The question is...how?

We took our first foray into the world of social VR beginning last summer, when we started building a version of Fullstack's New York City campus in Minecraft, so we could then put it on a multiplayer server and "go inside" using a Vive headset. Here's a video of Fullstack co-founder David Yang seeing it for the first time:

The following week, the Remote Immersive students got together to play on the Minecraft server together during Game Night:

Then the Minecraft project ended with a hackathon where students were challenged to build something cool in Minecraft, using a JavaScript library called ScriptCraft.

We were psyched to see the cool projects that students built, and the whole experience was a lot of fun. However, the learning curve with Minecraft is steep -- it just takes time to get familiar with the game, and start having fun with it. And for students at elite coding bootcamps like Fullstack, time is in short supply.

So we have decided to make the "Hacking Minecraft with JavaScript" workshop available as an optional part of the Remote Immersive program, rather than being a required workshop.

That being said, we think the Minecraft VR workshop is actually really cool, so in 2017 we're going to make it freely available to anyone who wants to geek out on this particular platform. If you want to get notified when the free workshop comes out, then make sure to follow Fullstack Academy on Twitter @fullstack. 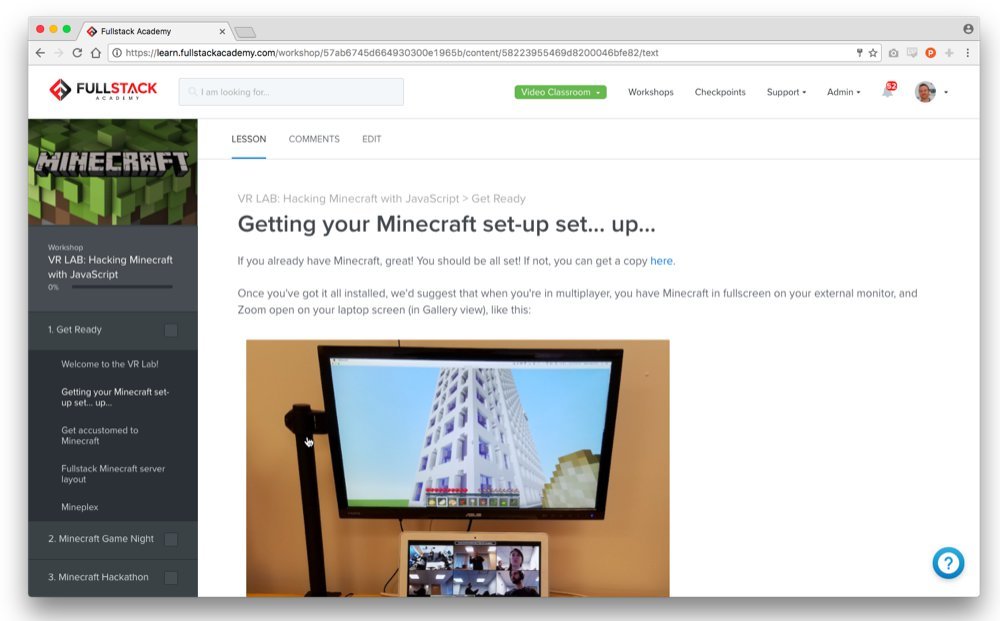 We were supposed to receive our Orah 360-degree 4k video camera in November, but now we're being told that the cameras will ship in January. When we receive it, we'll start live streaming guest speakers and lectures from our "CTO Series", so that remote students will feel like they're on campus here in New York City. Each lecture will look something like this:

Remote students will watch the live lectures in 360-degree video on a VR headset, so they'll have a truly immersive experience.

Which headset, you ask?

# Doing some research on the Vive

We've heard all the hype about the Vive, so we had to try it out for ourselves. The first task was to get a powerful gaming PC, which we'd need to run the Vive headset. We challenged ourselves to build a PC that was powerful enough to run a Vive for $600 or less. Was this even possible?

To find out, we made a couple trips to our local Micro Center (love that place) and got the things we needed...including an AMD 8-core processor and RX480 video card, and a decent case to put it all in. 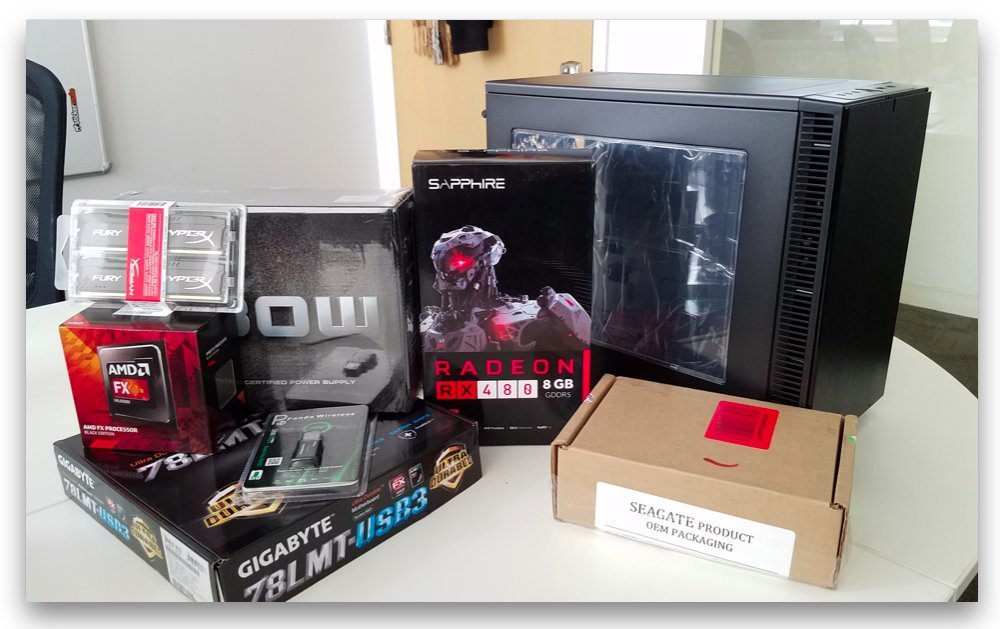 We brought in the big guns to help us build the Vive machine...including my son Dylan! 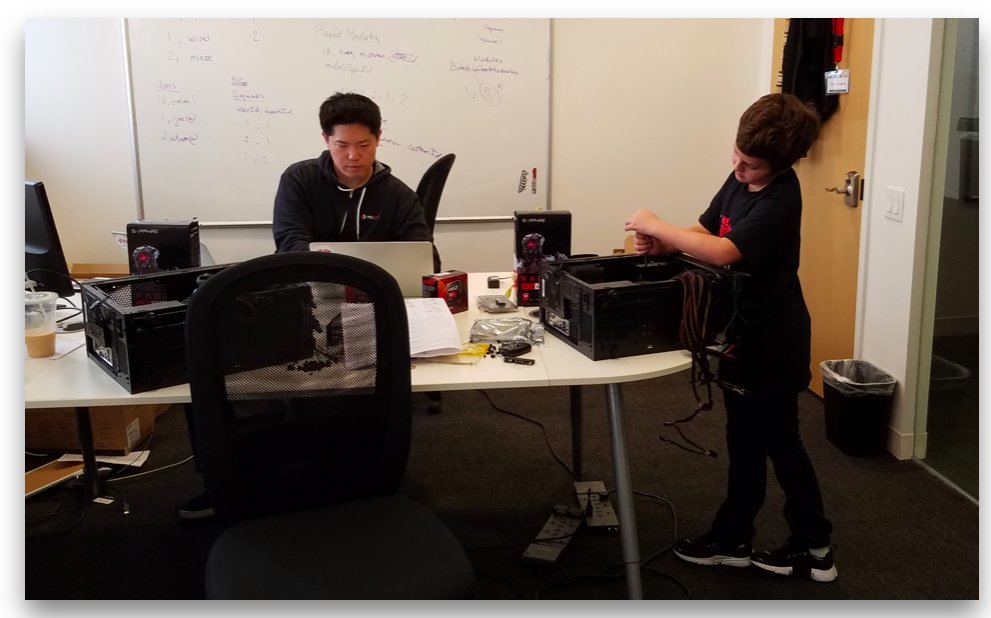 We actually built two of the machines, so we could do some side-by-side comparisons. As with every PC build, there's that special moment when you get the hardware connected, power it up, and see the computer come to life for the first time.

We installed Windows 10 64-bit, then Steam. Then we ran the SteamVR performance tester to make sure the PC's were up to spec, and got a passing score. So we installed the Vive base stations, and started using the headset. This is when all our hard work paid off.

The Vive is, in a word, incredible.

We have one of the rigs set up in the "fishbowl", and it has proven to be hugely popular with students as they walk by. We often hear students say things like "Oh is that a Vive? I've heard so much about it, I'd love to try it." There just seems to such a buzz around VR these days, and people want to see/experience it for themselves. We actually took the VR rigs with us on our annual staff retreat just before Halloween...where we rented out a nice house in the countryside, and had a three-day party...including a Vive setup with a bunch of different VR experiences loaded onto it. The most popular game at our retreat? Without a doubt, it was Google Titlbrush. Check out this short video of one our instructors playing around on it:

Alas, as much as we love the Vive, there are some (pretty big) downsides. The set up required is non-trivial (even for programmers) and the equipment is so finicky (<--technical jargon) that it requires frequent debugging (especially for connectivity issues with the controllers, which is a common complaint). Also, walking around the headset's cables can be a bit of a pain. So as cool as the Vive is, for our particular use case (building a "VR campus") it's simply not scalable for us at this point. For now, we think Vive represents a high-end experience that is best-suited for VR enthusiasts. But it's not something we're going to deploy at scale at Fullstack, at least not for now.

Instead, we're going to focus our VR efforts on a platform that we think will end up getting much wider adoption...and will end up reaching billions of people:

Mobile VR is projected to be a $100B+ industry in a few years, which will create a strong market for developers (like Fullstack grads) who choose to work in this space.

We particularly like Google's new Daydream VR platform, which runs on their new Pixel phone.

So we decided to send each Remote Immersive student a Daydream headset and Pixel to use during Senior Phase. People are just starting to hack on them, but we're already seeing some major comedy potential.

It's a brand new platform, so there's hardly any content (games/apps) at this point. We would have expected Google to have more apps ready at launch.

There is no social VR experience available yet.

We need a VR environment where we can have 25 or more students interact live on Daydream headsets. Basically, we need a VR campus, where our remote students can hang out with each other. Something along the lines of The Oasis in Ready Player One (well, at least heading in that direction).

But right now, nothing like that exists. Altspace's CEO is a fan of Daydream, so it's not a stretch see them launching a Daydream app at some point. Facebook is already starting to experiment with social VR (e.g. Oculus Party on Samsung Gear) but it's a buggy alpha release at this point, and not something we can use.

Here's what we wish existed, now:

We could use it to power an early-stage VR campus for our Remote Immersive students.

Ideally it would be powered by open source tools (like WebVR, three.js and/or A Frame) and/or run on the Unity platform.

If anyone in the Fullstack community is looking for a VR-themed project to work on — maybe for a Stackathon or Capstone project, or just as a cool side project — then we encourage you to help solve this problem!

If you can build something like this, then (as far as we know) you'd be the first, and could claim bragging rights for building the first VR campus experience on Daydream.

Mark Davis runs product for Fullstack Academy. He can be reached on Twitter @digitizemylife .

How to use Node.js on an old-school Mainframe (hard hat required!)