Front-End vs. Back-End Developer: What Is the Difference? 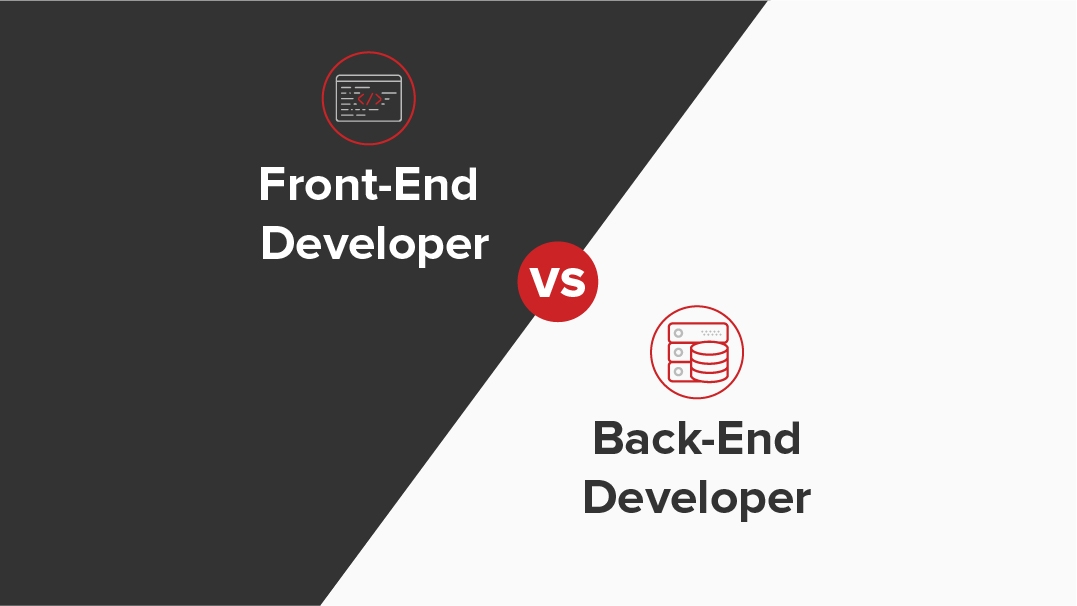 Maybe you’ve just started to explore programming or maybe you’re already well on your way to becoming a web developer. Wherever you are on your journey, it’s important to choose the right mix of tools, languages, and specialties that will match your career and personal objectives.

Some web developers decide to specialize in a given programming language (JavaScript, Python, Swift), while others cultivate expertise in a particular area of web development, such as mobile devices or databases. The most common distinction for web developers is the choice between front-end and back-end, and as you progress in your studies, you’ll undoubtedly encounter these terms more and more.

So what’s the difference between front-end and back-end web development, and what can you expect from each area in terms of skill set and daily work?

What Is Front-End Development?

Front-end development refers to crafting the user experience and user interface that site visitors interact with. For this reason, the front-end is often called “client-side” because it involves everything that takes place on the client’s computer.

Front-end developers are responsible for customizing a website’s look, feel, and behavior. The user interface includes everything from font sizes and colors to dropdown menus and forms. An excellent front-end experience is essential to attract and retain users.

Because front-end development focuses so much on a website’s appearance and aesthetics, it’s often confused with web design. Although there’s often a fair bit of overlap in skill set and responsibilities, the divide between designers and developers can usually be summed up as modeling versus implementation.

In the course of their job, web designers may engage in user research, build wireframes and mock-ups, create graphics and logos, and select fonts and color schemes. They dictate how the website will look and feel. Front-end web developers, meanwhile, focus primarily on the technical details of how to bring web applications to life.

What Is Back-End Development?

Back-end development, on the other hand, is about defining a website’s internal logic. While the front-end of a website is called “client-side,” the back-end is referred to as “server-side” because it runs on the website’s server and not on the user’s computer.

Every website back-end consists of three parts: the server, the database, and the application. Back-end developers write code that enables these three components to interact and work together to perform functions and deliver information to the end user.

For example, when you place an order via an online marketplace like Amazon or Etsy, the back-end software creates a new entry in that website’s database that contains information about your order such as item, price, and shipping address. When you want to retrieve the order or change a piece of information, the software pulls your specific entry from the database and sends the data to the front end of the site, where you are able to edit it.

The Difference Between Front-End and Back-End Development

A good example of the distinction between a website’s front-end and back-end is Google Maps. Let’s say you pull up Google Maps to find the fastest way to get to your friend’s house. You enter your starting point and destination into the website’s front-end, which then sends your search query to the back-end, which is running somewhere on Google’s servers. The website’s back-end calculates, for multiple modes of transportation, the most efficient routes between the two places you entered and sends these routes back to your computer. The front-end takes this routing information and displays it to you on a map of your current location.

Once you grasp the difference between the front-end and the back-end, you can start to see any large website in terms of this division. For example, Facebook’s back-end includes software applications that determine how to order your friends’ posts in your timeline and which users to recommend as friends, while the Facebook front-end receives this information and displays it to you in a pleasant, user-friendly interface.

The front-end and back-end are usually completely separate from each other. Facebook is constantly changing the back-end algorithms it uses to order content, but it’s rare for developers to alter the platform’s front-end to reflect these changes.

Front-End vs. Back-End: The Skills Required

Now that you know the difference between the front-end and back-end of a website, which programming languages do you think are best to learn for each field?

The primary front-end languages are HTML, CSS, and JavaScript. To start learning, sign up for Fullstack Academy’s online Intro to Coding course.

In tandem with these three pillars of front-end development, many programmers will employ a variety of frameworks and libraries to make it easier to write and organize their front-end code. These add-ons to HTML, CSS, and JavaScript aim to make development faster and more structured.

Some of the most popular front-end frameworks and libraries include Bootstrap, jQuery, AngularJS, and React (for JavaScript), plus Sass and LESS (for CSS). Front-end devs must also use mobile-first or responsive design to ensure web pages render well across devices.

The roadmap for back-end development is a little less clear-cut. Software that runs on the back-end can be written in hundreds of different programming languages, so back-end developers usually narrow things down to a handful of languages that are best suited for their needs. JavaScript, though initially a front-end language, is increasingly being used on the back-end, thanks to the popular server framework Node.js. Other common back-end languages include Scala, Python, Ruby, and Go.

Like front-end developers, back-end developers, too, employ frameworks and libraries to take care of low-level technical details, so the developers themselves can focus on the higher-level tasks at hand. (Sort of like using the “SUM” function in Excel to get a departmental budget done more quickly instead of adding everything up yourself.) Back-end frameworks and libraries include Rails for the Ruby programming language and Django for Python.

Nearly every website that allows users to make requests will have a database on the back-end. In addition to programming language know-how, back-end developers should have some experience with database technologies like Oracle, Microsoft SQL Server, and MySQL. This knowledge is used to write business logic, or a set of rules, into the back-end code. Developers use these rules to dictate how to create database models, how to write to the database, and how to query it for relevant information.

Even though you’ll probably end up choosing between front-end or back-end in your career, there are many benefits to having both skill sets. In the Junior Phase of both Fullstack’s full- and part-time immersive programs, students begin to master HTML5, advanced CSS, and modern technologies like React on the front-end and Node.js and APIs on the back-end. Because Fullstack focuses on one language—JavaScript—as opposed to focusing on multiple, its programs uniquely prepare students to seamlessly work in both realms.

By learning both front-end and back-end skills, students are better prepared for the workforce and can cultivate a successful career as a software developer by providing more value to their teams and employers.

Up Next: Choosing a Program or Bootcamp

Demand is high for developers right now, and there’s no shortage of coding bootcamps offering to teach you front-end, back-end, or fullstack development. When considering which coding bootcamp to choose, the most important criteria should be whether the program will prepare you for the job you see yourself in.

For example, bootcamps that focus exclusively on the Swift programming language will prepare you to develop iOS apps but not to build websites. Bootcamps that teach you a wide range of skills might appear to give you a lot of flexibility, but you might not develop enough expertise in any single language to find a job. You’ll have to decide on the right balance between versatility and specialization so you can successfully land a position in your chosen field.

See how front-end and back-end skills are woven into the curriculum at Fullstack Academy and the Grace Hopper Program, or meet the team of instructors.

4 Reasons Why Winter Session Coding Bootcamp is Worth It