How to Break Into the Chicago Tech Scene 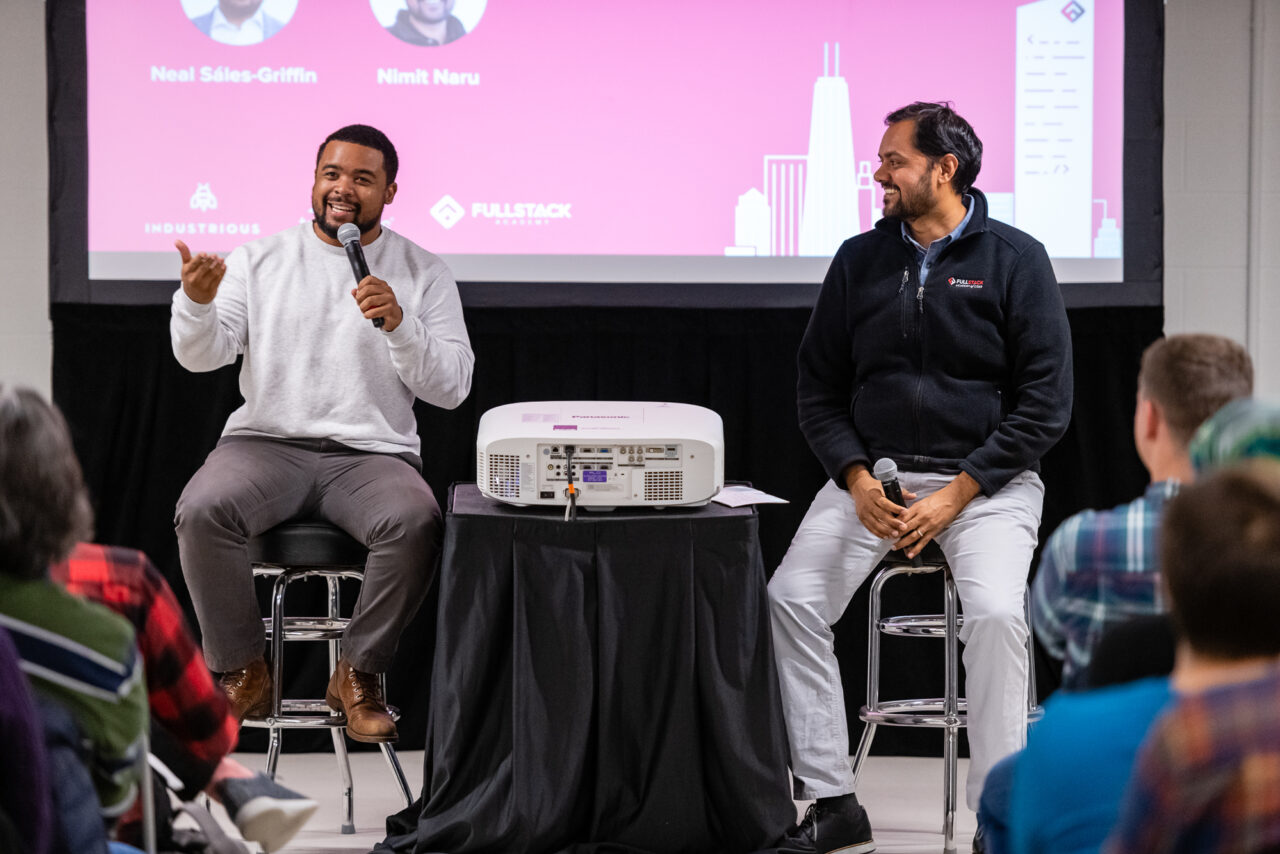 At a recent event at Industrious Chicago’s Central Loop location, Techstars Chicago managing director Neal Sáles-Griffin and Fullstack Academy cofounder Nimit Maru broke down what’s next for the Chicago tech scene and how you can get involved.

To hear them discuss everything from Neal’s background as the founder of The Starter League to what makes Chicago different from Silicon Valley and New York City, keep scrolling to learn more or watch the highlight video.

In the past year, the bootcamp industry grew 49%, with coding bootcamps in 71 U.S. cities and 38 states. In the early 2000s, if you wanted to be a developer, it was hard to know which coding languages to learn, how to code, and even what it takes to be a software engineer. “There were a lot of ways for existing developers to get even better. But nobody thought we could teach somebody how to actually code,” Nimit said to a crowd of over 80 people at Industrious on Tuesday, October 29.

Serial entrepreneur Neal Sáles-Griffin set out to change that. After he graduated from Northwestern, he started creating what would soon become The Starter League, the first-ever coding bootcamp. “When I had the idea to teach people how to do this, there was a lot of resistance in the tech community,” he says. “But the problems that have been solved by educating these students have been incredible.”

From there, other coding bootcamps (including Fullstack Academy in 2013) started to pop up, and Neal’s role transitioned from creation to mentorship and thought leadership. In addition to his position at Techstars, he also serves as the CEO of CodeNow, a 501(c)(3) nonprofit teaching high school students how to solve meaningful problems through coding. “Anything education/school-related, I just lean all the way in and I try to help as many people as I can,” he says. “I just love being in rooms where I can share something with someone because they’re going to be able to do more with it than I could.”

If you’re interested in taking the first steps to building your own app, website, or project, sign up for the UIC Coding Bootcamp, where you can learn the skills you need to launch your career in 12 to 26 weeks. Designed for total beginners, it will help you learn the basics of JavaScript, HTML, and CSS—all of which will prepare you for whatever’s next.

Neal’s top tip? “Solve a problem you care about. Everyone in this room is absolutely qualified after this event to go home and write code or design some screens or make some software.”

Want to take a deeper dive into the Chicago tech scene? Check out a few of these resources below:

As far as the future of Chicago tech goes, a 2018 KPMG poll of over 750 global tech industry leaders ranked Chicago as the third-most innovative tech hub in the U.S., with the startup scene growing over 270% in the past 10 years. “Chicago is a profitable city. Chicago is a city where we’re not just focused on scale and growth and fundraising—we’re focused on quality experiences for our employees [and] our customers,” Neal says, noting that he sees the city having a healthy mix of venture-backed companies in the next five years.

Breaking Into Chicago Tech: A Conversation with Neal Sáles-Griffin