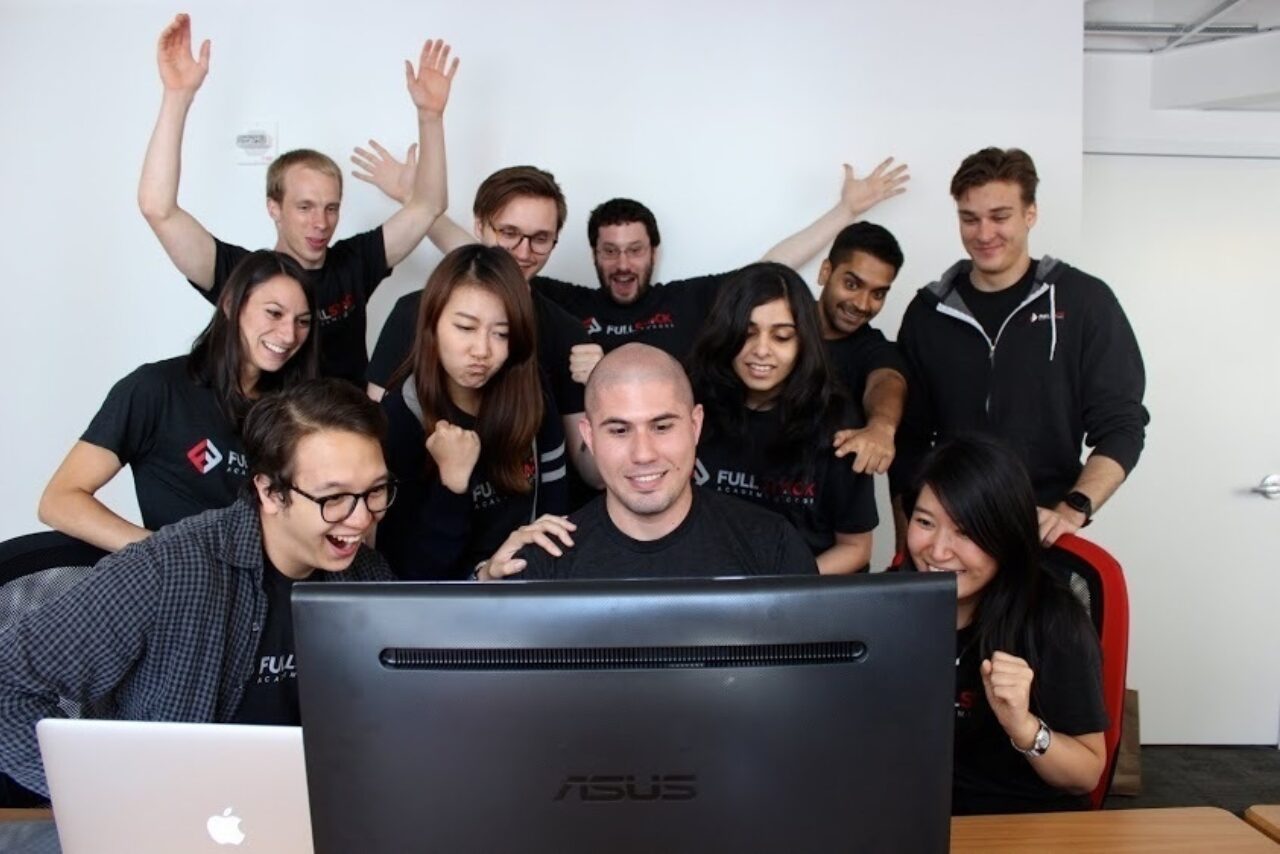 Fullstack Academy students share a few traits: they’re motivated learners, intellectually curious, and all-around good people. But not everyone starts their road to code from the same point, and while some come from quantitative backgrounds, others are drawn to code for its creative aspects. The following student stories show how passion and motivation are the most important accelerators to a career in software development.

Carolyn became a structural engineer to put her stamp on the New York City skyline, but after a couple years on the job, she was a bit disillusioned by the industry-drudgery. Her strong quantitative skills translated easily into working with code, and she applied successfully to Fullstack Academy’s full-time program in 2015. Her love of building lead her to programming, and her desire to help others persuaded her to join the Fullstack Fellowship program after graduating, as a teaching assistant. Once in the job search, it was a combination of all her education and expertise that landed her an amazing opportunity as an engineering resident at Google. Check out some of her work while at Fullstack here.

Nick graduated from SUNY Geneseo with an aesthetic eye, the desire to create beautiful things, and a degree in Clarinet performance. Unfortunately, the remarkable ability to quickly identify what key a song is in left him with few lucrative employment prospects. Using that same creative energy, Nick focused on learning to code using online tutorials and coding challenges before successfully applying to Fullstack. After graduating from the full-time immersive program, Nick was a web-developer for Rehash studio in Brooklyn, and is now "Creative Developer" at Squarespace. Here’s an interesting and short video presentation Nick made about UX/UI principles! (Note: He’s still creating music as well)

After working in Equity Research at both Morgan Stanley and Goldman Sachs, Cristina was, by most considerations, a successful finance professional. But she had a longstanding interest in more technical areas, having studied mechanical engineering and applied mathematics at the University of Pennsylvania. That interest lead her back to programming, writing scripts to automate her tasks and work smarter. Writing code again reignited an old desire to be an engineer, so she took a leap and applied to Fullstack’s full-time immersive program. Thirteen weeks—and a few “Reel Cool” projects later—she was quickly hired by the FinTech company Hightower, and is now building innovative apps in the commercial real estate space. Check out Cristina’s interview with Fullstack co-founder David Yang.

Life as a social worker can be rewarding, but nobody would deny it can be a heavy job. Sarah started learning to code as a way to relieve the stress of a long day, but soon her hobby became an obsession. She saw Fullstack as a pathway to a lucrative, but still personally-rewarding career. Now working as a software engineer at Yuzu, Sarah is still “giving back” to the community by speaking at coding meetups and other tech events. Check Sarah’s interview with Fullstack co-founder, David Yang.

A Math fanatic, Dan was tutoring students in New York City before he applied to Fullstack. The same knack for problem solving that helped him fall in love with math drew him toward coding as a profession. Following a standout performance at Fullstack, Dan flexed his teaching muscles for a while as a Teaching Fellow before aceing Google’s application process! A remarkable journey, Dan has successfully leveled-up his career and now works at Google as an engineer. If you want to see a cool project Dan created, check out his version of the classic game, Duck Hunt.

Liana had positioned herself perfectly for a career in health and medical research, but after years of successfully advancing in that sector, she simply needed a change. Coding offered her a personally and creatively fulfilling career, so she took it upon herself to learn after work and on weekends. During her time at Fullstack Academy, Liana displayed an eagerness to learn and hustle that translated into a very swift job search—she’s now working as a developer at RUN and breathing easy. Here’s a Fullstack-hackathon project Liana worked on to remind you when it’s work time, or play time.

After graduating Northwestern with a degree in Journalism, Matthew interned at a few innovative startups and large tech companies to explore the intersections between communication and technology. With that kind of exposure to the fast-paced tech world, Matthew knew he wanted a more hands on role in this growing industry. He applied to Fullstack on a friend’s recommendation, and is now a Software Engineer at Catalytic in Chicago.

Before coming to Fullstack, Emily had a good job working with engineering teams, but felt like she was on the outside looking in. She attended Fullstack Academy in order to work hands-on with code and build the type of projects she was previously just helping debug. Now a software engineer at Yhat (pronounced Why-Hat) she’s building decision making tools that help data scientists make real-time insights from information. And if you liked Cards Against Humanity, check out GIFs Against Humanity, a hackathon project Emily worked on!

Be sure to check out additional student project, tech talk, and hackathon videos!

Why do Fullstack and other top coding bootcamps have such hard admissions?

How to Use V8 for Fast Property Access in JavaScript