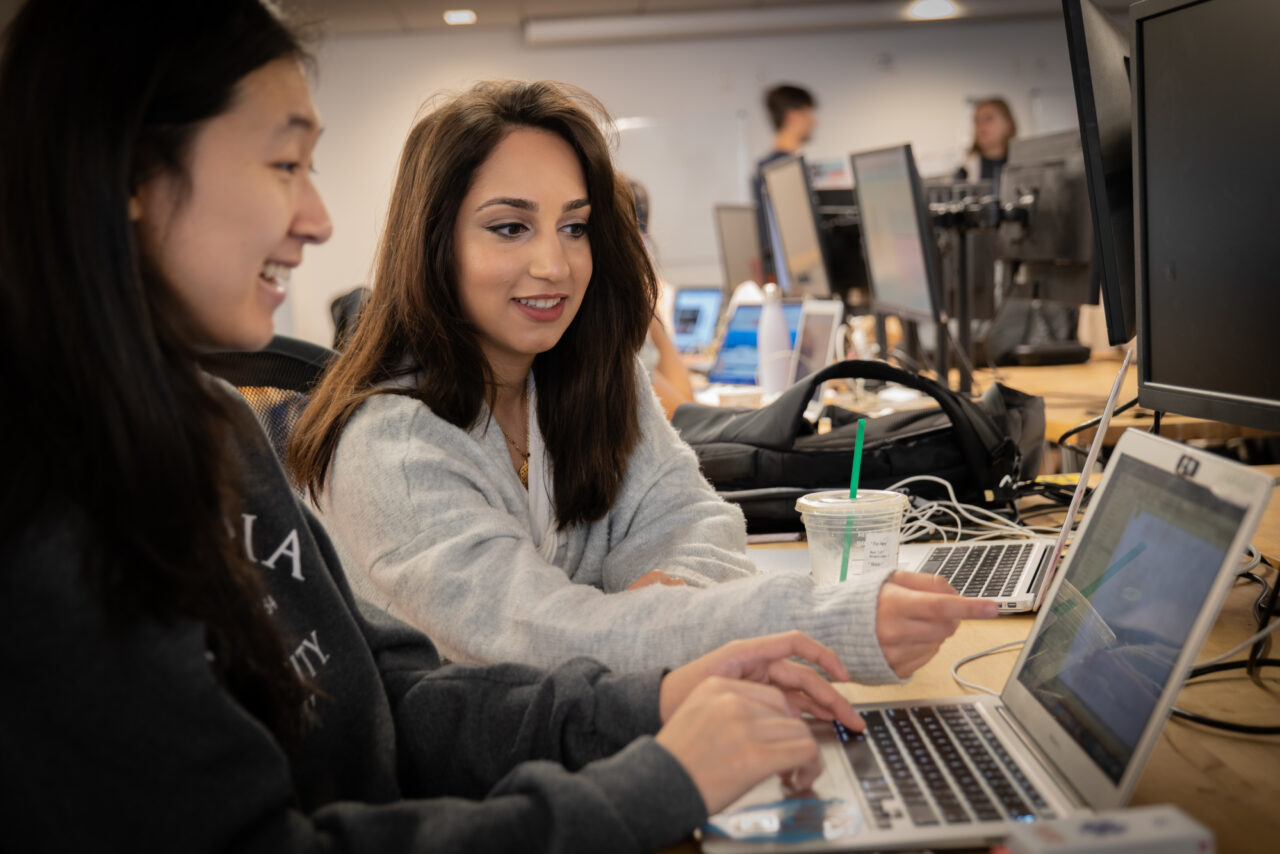 Everyone needs a dose of inspiration from time to time. Women, trans, and nonbinary individuals in tech especially need a network of role models and a strong community to offer support and insights—and Twitter can be a great way for aspiring women+-identifying programmers of all backgrounds to find just that. The platform is chock-full of diverse tech industry folks willing to share their knowledge and experiences on a regular basis.

We recently shed some light on the Chicago-area civic tech community, and today we’re following up with a feature on some of the city’s top cis and trans women programmers. Read about these 16 women+-identifying programmers, and then give them a follow on Twitter.

Rose Afriyie is one of Chicago’s leading civic tech developers. She is the cofounder and executive director of mRelief, a nonprofit that helps users access social services. More specifically, it makes it easy for Americans to find out whether they qualify for food stamps and, if so, to apply for them. Afriyie also chairs BYP100, a national organization of Black activists, “dedicated to creating justice and freedom for all Black people.” Follow Afriyie on Twitter for the latest news on both her nonprofit and the Chicago civic tech scene in general.

Rachel Baker is head of engineering at Wirecutter, which means she’s responsible for the software engineering, data engineering, and project management departments—and has somehow managed to grow the engineering team from one developer to 30. Baker is also a WordPress Core Committer—which makes her one of the select trusted few with the power to merge code into the WordPress code base—and was the lead developer on the first distributed REST API, used by around a third of the internet. Follow Baker for all WordPress-related news and to get a glimpse into what it’s like to engineer one of the web’s most popular sites.

Brittney Braxton is a software developer at Duo Security, a company that combines security expertise with a user-centered philosophy to provide two-factor authentication, endpoint remediation and secure single sign-on tools. She initially graduated from the University of Michigan with a psychology degree before following her passion and, like many would-be developers, enrolling in a coding bootcamp. Braxton is committed to the representation of marginalized groups in tech and now organizes for the People of Color Code meetup and Write/Speak/Code.

Veronica Buitron is co-founder and CTO of Tango Code, a custom web and mobile app development agency. As a leading woman in tech, Buitron is passionate about promoting diversity in the industry. To this end, she has collaborated with Chicago-based incubator 1871 and the Metropolitan Chicago YWCA to create 3D (Developing Digital Diversity), an eight-week course that teaches mobile app development to children. Buitron was also an official 2019 member of the Forbes Technology Council.

Naomi Ceder is an open-source development manager at Blick Art Materials. Outside of her day job, Ceder is an elected fellow of the Python Software Foundation and serves as chair of its board of directors. She is also the co-founder and organizer of Trans*Code, a hack day for trans people and allies in the UK. As you’ll see from her tweets, Ceder is a huge advocate for Python and for greater inclusion in tech. She continues to speak internationally on both subjects and has been doing so for more than 15 years.

Coraline Ada Ehmke is a software developer, speaker, writer, and open-source advocate. She has spent more than 20 years in software development and is currently a core platform architect at Stitch Fix. Ehmke is perhaps best known for creating Contributor Covenant, the most popular open-source code of conduct in the world. As a Ruby expert, Ehmke serves on the board of directors for Ruby Together and was formerly on the board of RailsBridge—both languages that she continues to speak about on a regular basis. Ehmke is a prominent promoter of diversity and inclusion in the industry. Since 2014, she has written and spoken publicly about her gender transition in hopes that it will make the path easier for others to follow.

Alexis King is a functional programming expert who specializes in the programming languages Haskell and Racket and works full-time on the latter at Northwestern University. In her spare time, King contributes to open-source projects, writes libraries, and builds tools. She’s also passionate about teaching functional programming, something you’ll notice if you follow her on Twitter. She speaks widely on the topic, writes about it on her blog, and creates extensive documentation for all of her software builds.

Rebecca Miller-Webster is the CTO at Tandem and the founder of Write/Speak/Code, a platform dedicated to increasing the visibility of female and nonbinary coders. Before moving to Chicago, Miller-Webster was the founding teacher at a New York coding bootcamp and the organizer of GORUCO (Gotham Ruby Conference), a one-day development conference. In 2014, she was named one of 7 Brilliant Women in Tech by Craigslist founder Craig Newmark. Follow this engineering leader for daily inspiration, book recommendations, and industry news.

Vanessa McHale is a software engineer at IOHK, where she works primarily in Haskell. When not developing professionally, McHale has made several contributions to open-source libraries in Haskell, Idris, and ATS. If you’re interested in learning about a lesser-known programming language, McHale provides a deep dive into the world of Haskell and other functional programming languages.

Lorena Mesa is a data engineer on GitHub's software intelligence systems team. She’s also a director of the Python Software Foundation and a co-organizer of PyLadies Chicago, a Python-focused meetup for women and nonbinary individuals. Mesa has given Python talks at more than a dozen conferences and been featured on a number of podcasts. Follow her for a heavy dose of—you guessed it—Python and open-source-related tweets, as well as for motivational comments on the state of women in tech.

Genevieve Nielsen is a graduate of The Starter League—a Chicago coding bootcamp now owned by Fullstack Academy—who is using her tech skills for good. In 2014, Nielsen—together with Rose Afriyie—helped create mRelief and is now CTO at the startup. Her dedicated work there saw her named to the Forbes 30 under 30 class of social entrepreneurs for 2017. Nielsen tweets about mRelief, nonprofits, and the wider Chicago civic tech scene.

Tania Rascia is an open-source developer and designer currently working as a front-end software engineer at DAIS Technology—though she previously worked for nearly a decade as a professional chef. When she isn’t working for DAIS, Rascia is on a mission to write “the missing instruction manuals of the web,” as she explains on her personal website. She’s written documentation and tutorials for companies like DigitalOcean, SitePoint, and Envato Tuts+, so if you want to improve your coding knowledge, there are few better people to follow on Twitter.

Andrea Rene Soper is a cloud engineer at Platform.sh, a platform-as-a-service company that helps developers manage their applications. Soper has been a developer for more than a decade and has learned a variety of languages, from Ruby to Objective C. PHP and Drupal are her favorites, however, and those are mainly the languages you’ll find her tweeting about.

Amanda Hinchman-Dominguez is a senior Kotlin engineer at 47 Degrees, a global consulting firm specializing in functional programming. Amanda tweets about programming, making a career change, and healthy work habits, and her account is a good place to learn about the Kotlin computer programming language.

Rebecca Schmidt is a senior software engineer for Capital One. Currently getting her master's degree and a member of Women Who Code, her account is filled with musings on the importance of avoiding burnout, job-search tips and anecdotes, and more. She also mentors middle school students who want to learn software development skills through the Capital One Coders program.

Dev Bootcamp grad Jen Trudell is a software engineer at Ascent who primarily works in Ruby, Rails, and Go(lang). She tweets about tech, coding, and feminism and was a lawyer for 10 years before making the switch to coding.

Twitter is a fantastic community for women in tech, but it shouldn’t be your only support group. When you enroll in Fullstack Academy, you’ll be surrounded by open-minded women+-identifying students and allies committed to building their coding careers.

What is Coding? Part II: Life as a Programmer

Why So Many Dream Companies Hire Fullstack Grads