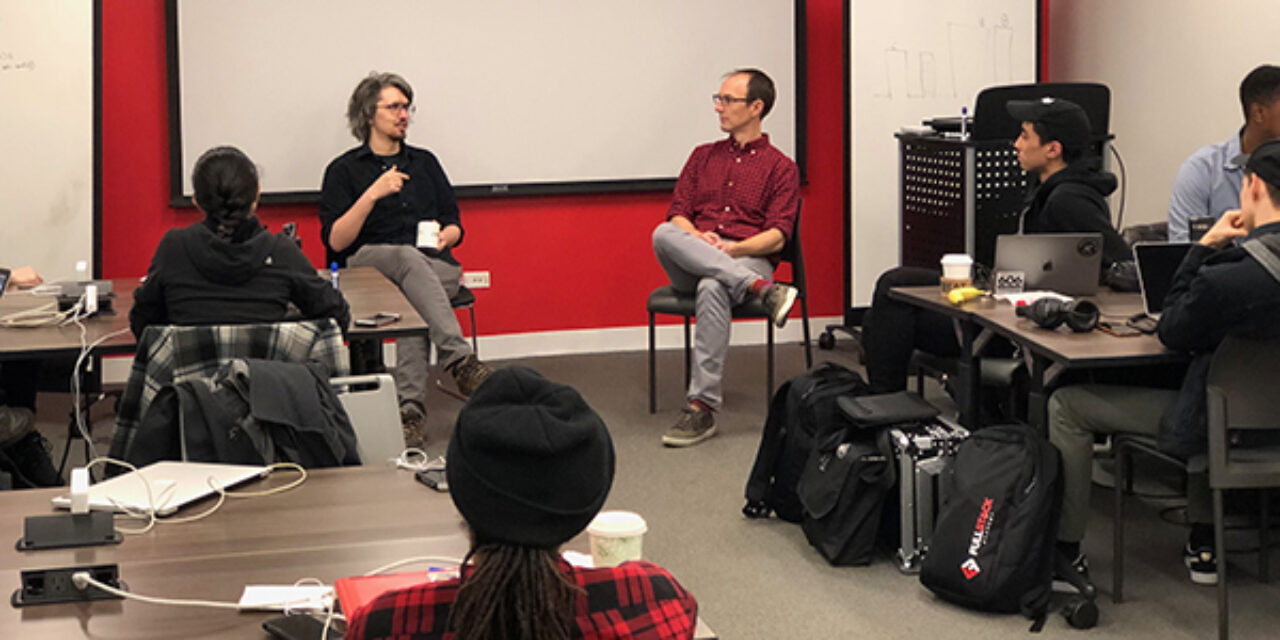 Collin Miller is unequivocally the most successful high school dropout we’ve ever had the privilege of employing. His inner drive and engrossment in coding were apparent even in his early years—midway through a high-school homeschooling program, he decided to start working full-time as a video technician instead. When he wasn’t at work, he was refining his understanding of Ruby on Rails.

Coding was by no means new to Collin, even at that age. His dad was a software programmer and that kickstarted an interest in Collin in his younger years, driving him to play around with programming and eventually start making websites on his own.

At that time, no bootcamp models existed. Collin relied on books, blogs, and any materials he could get his hands on to boost his programming studies. As he worked diligently in his off time to learn more, his career began to quickly move upward. He left the video tech gig to work for a startup before eventually becoming the Director of Front-End Engineering at The Onion, a widely-known satirical publication.

Baby, I’m a Believer (In Bootcamp)

While at The Onion, Collin was introduced to Fullstack when he interviewed one of our grads. The capstone project this alum had worked on, as well as the interpersonal skills displayed during their interview, left a lasting impression. (In case you’re wondering: Collin did offer the job to the Fullstack grad, but alas, he had already accepted employment elsewhere.)

That exchange, plus working alongside a co-worker who was also a bootcamp grad, led Collin to conclude that the bootcamp experience had to be legit. And when he looked more into Fullstack as a company, he was drawn to the transparent and open culture. Clearly somewhat of a rebel himself when it came to traditional education, it wasn’t a hard sell for him to embrace that bootcamp could produce qualified junior developers.

As a Director at The Onion, Collin found the mentoring and teaching aspects of his leadership role eminently rewarding. Being a sounding board for his team and validating that they had a true understanding of how to do the things he was showing them made him feel like he was doing much more than simply creating a product. He was actually transforming people’s lives by giving them new tools, new strategies, new ways of thinking.

Yet at the same time, he began to feel stagnant in his technical work. It seemed that he’d mastered the technical side of his role—what to do now?

Collin realized that being a coding instructor would allow him to merge his love for tech and teaching, and he thought again of Fullstack. He wanted to be a part of our fresh, ever-evolving culture, and we were all too happy to bring him on board.

We should mention here that Collin also has experience as a performer and improv comedian, and that makes him an intently attentive instructor. As an improv actor, you can’t afford to tune out for even a second, lest your scene go disastrously awry. Because of that background, Collin is an active listener and able to pick up on issues his students are having so they can be addressed before snowballing into bigger problems. He is also known for asking lots of questions, both to his students and himself, about how to best proceed or approach a problem.

As an instructor on the Chicago campus, Collin sees firsthand the value that pair programming provides to students. Working with someone else means you must be a good steward of not only your own time but your partner’s time, too. There are other ways to hold students accountable as well—we have an internal website called Learn that offers regular check-ins, and students are given many assessments along the way to gauge where everyone is at.

Our focus on student outcomes is also a key differentiator. We’ll adjust what we’re doing to make sure students are getting the results they want after graduation. Fullstack staff are always talking about what we can do to be better, and we encourage instructors to be very honest and transparent with their feedback.

Collin is particularly interested in shaping the front-end curriculum and is actually working on a lecture and workshop centered around how to more seamlessly integrate input from the design and development teams on projects, as this can prove challenging for developers.

If you’re considering bootcamp, Collin recommends cultivating a spirit of resilience within yourself. You must have an ability to invite—and even celebrate—failures. You will not know everything, and you won’t always get things right on the first—or second, or third—try. Being comfortable with being uncomfortable is crucial; otherwise, you’ll lose motivation and confidence and be more prone to throwing in the towel.

Collin also strongly urges you to attend meetups whenever you can. You will mingle with a lot of people who are interested in the same things as you, get a sense of the joy that programmers experience from their work, and stumble upon new tech and tools you wouldn’t have known about otherwise.

Fullstack Academy Chicago is the Midwest’s top coding bootcamp. Offering our flagship course, the Full-Time Software Engineering Immersive, Chicago’s campus is a great place to springboard your career into the city’s growing tech scene. Find out how to join an upcoming cohort at an Info Session.