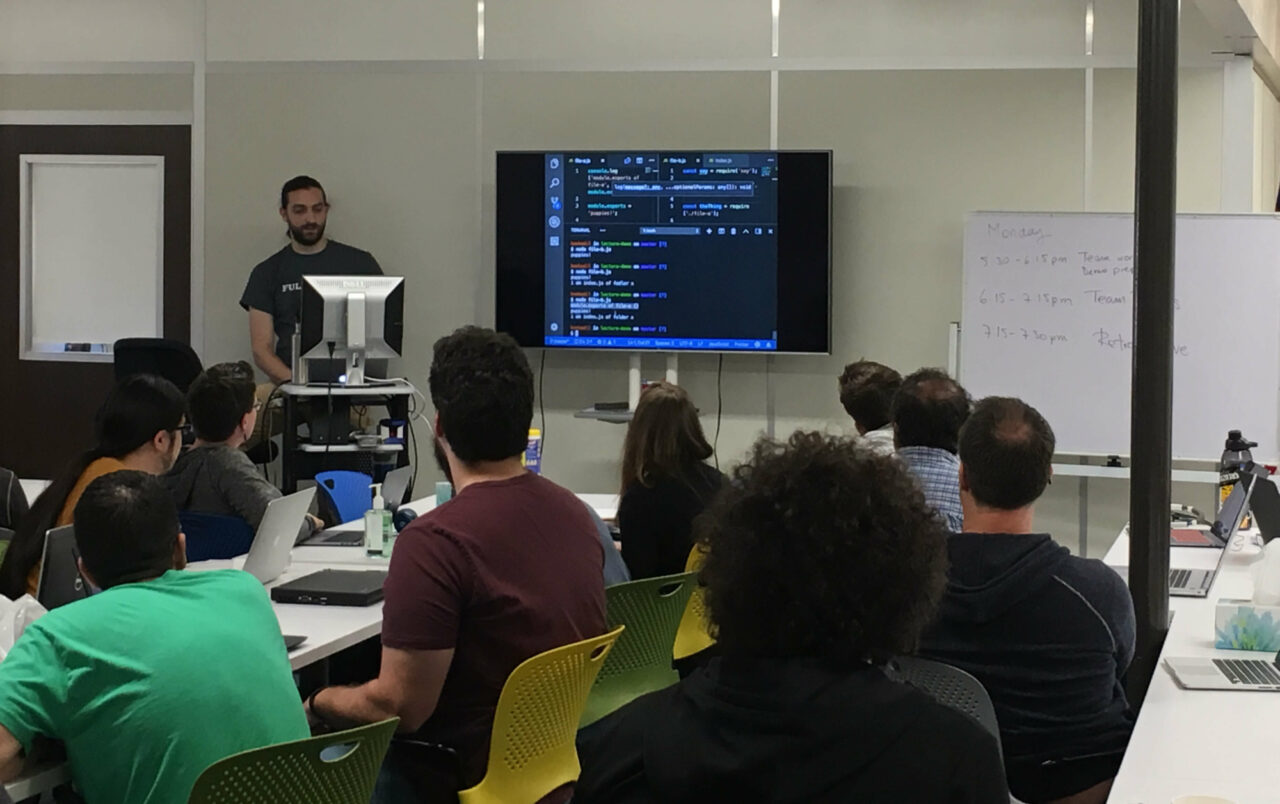 Note: Omri has since moved on from working on Fullstack. We are grateful for his contribution while here at Fullstack and Grace Hopper; he is a great example of the kind of instructors we want on our staff.

When we spoke with instructor Omri Bernstein, the most pressing thing on his mind was his upcoming temporary move from NYC to Southern California to launch the Ticket into Tech program. SLO is a joint initiative between Fullstack Academy and the City of San Luis Obispo (hence, the name SLO) to train local former plant workers and manual laborers in hopes that a new pool of tech talent will prevent the local economy from crashing as the state’s last remaining power plant shuts down in the next few years.

“To be frank, I’ve never had a particular direction, but I love programming”

Omri’s journey to coding was a bit of a winding path. One of his earliest memories regarding programming is working like crazy on his TI calculator in high school, eventually developing a tool where you could turn the calculator sideways and type on it, like Text Editor. He spent lots of time (in and out of class) working on that, as well as a Pokemon clone game idea that he started but never finished.

He went on to college at Hampshire College, a liberal arts college with an alternative curriculum. There, he experimented with many different ventures, one of which was robotics programming: creating animal robot mimics for the purpose of ethology research. Another project he refers to as a “flea market simulator”—a game for computers to test out different AI strategies—which introduced him to his advisor and spurred him to go into the Computer Science program.

Omri’s senior thesis project was a quantum computer simulator and learning platform, somewhat like Code Academy. A former EMT colleague named Zeke happened to be an advisor for this project, and it was Zeke who later became an instructor at Fullstack and told Omri about our instructor openings.

Six months after his college graduation, Omri interviewed and was hired on to be a Fullstack instructor. His strong background in programming and communications skills helped him secure the job.

Omri was drawn to Fullstack both because of the culture and the students. The level of student engagement at Fullstack creates an environment unlike that of any other academic environment he’s experienced. Typically, you’re forced to create excitement around the concepts you’re teaching to get students interested, but at Fullstack everyone’s already totally on board.

Fullstack students, in general, are hyper-motivated, immensely ambitious, and incredibly driven. At Fullstack, Omri feels that he actually pumps the brakes more than the gas, and that’s a very unique position to be in as a teacher. Instead of trying to verify his students are paying attention, he has to make sure they’re balancing their studies with self-care—that, in some cases, they’re actually sleeping.

More than anything, Omri loves getting to experience that moment when everything clicks for a student. As an individual, you only get to experience that so many times in your own life, so being able to see it happen for others is really special and fulfilling—especially when what’s clicking is something you love as much as Omri loves coding. He finds coding to be an artistic craft: a process of building, iterating, modifying—and sometimes maybe even throwing the whole thing out and starting over. It’s all part of the creative process.

You may be surprised that Omri’s advice for potential students has nothing to do with technical skills—though he admits there is a lot you can do to catch up in that domain. However, Omri believes the most important thing you can do is be honest. It sounds simple, but you need to be honest with yourself, your mentors, and your teachers about where you’re at. If people don’t know what you’re struggling with, they can’t help you.

Think about the saying, “Fake it till you make it.” We’ve all heard it, right? In a lot of situations, we’re almost made to feel like we have to look capable around other people—even if we aren’t. At Fullstack, that’s an anti-goal. There’s no need to appear capable if you are not. It’s better to remember that you’re here because you’re trying to grow and learn—and also recognize that we know that, and we aren’t judging you or expecting any different from you.

Omri acknowledges that imposter syndrome is prevalent among prospective students and those in the programming industry, and he wants to assure you that if you’re reading this profile and thinking of him as an established, expert-level engineer, he is not. Nobody is. Or maybe everybody is—including you! Either way, he wishes he had gone through bootcamp himself instead of learning programming via the long, winding, self-directed slog of a route that he did take.

The fact is: Finishing bootcamp won’t make you any less of a “real” engineer than anyone else.

Fullstack offers you the chance to maximize learning and efficiency in a condensed time frame—something you now know some programmers wish they’d had. So what’s stopping you? Learn more about how to apply to Fullstack Academy.

15 Examples of How EdTech and JavaScript are Transforming the Classroom